The flexibility of the learning service provided by internet based scenarios allows students to learn at their own time, place and pace, enhancing continuous communication and interaction between all participants specifically for knowledge and community building. In this context, the ICT and educational support/media support services are mainly concerned with the scalability and efficiency of existing platforms and their flexibility for adapting learning systems to new environments in order to develop leadership in online and blended teaching and learning.

Meet Covadonga Rodrigo from UNED and listen to what she says about the expertise on institutional support.

Meet our experts on institutional support

Covadonga Rodrigo is an assistant professor in the Department of Languages and Information Systems, EDEN fellow and director of the Digital Inclusion Lab at UNED (Universidad Nacional de Educación a Distancia). Since 1998 she has held different teaching and management positions at the university level, being Computer's Architecture Area Coordinator (Univ. Antonio de Nebrija, 1999-2000), Assistant ProVC for Applied Technologies at Associated Centers (UNED, 2006-2010) and Pro-Vice Chancellor for Technology (UNED, 2010-2013). In 2012 she was appointed to the Executive Group at the Sectorial Committee of Information Technologies and Communications of the Conference of Rectors of Spanish Universities (CRUE-TIC), leadering the working group on Virtual Campuses and University Web Portals for two years.

Since early 1990’s, she is been involved in several European and Spanish competitive research projects. She has also experience in evaluating and assessing the quality of e-learning and blended models, working along with universities in Cyprus, Greece, UK, Spain, Sweden and Switzerland related to the E-xcellence label (EADTU) and with quality agencies for HE in Costa Rica, Mexico and Ecuador. She has also experience in the development of standards at the national level in AENOR (Spanish Association for Standardization and Certification, member of ISO).

Covadonga also presented the Artificial Intelligence webinar week, June 2020: I would not worry so much about buying an intelligent learning system but spending money on buying a sexist one

José Bidarra has a PhD in Educational Communications by Universidade Aberta (the Portuguese Open University), where he is currently Professor in the Department of Science and Technology. He is also co-author of the virtual pedagogical model used at Universidade Aberta. His current research interests focus mainly on the application of multimedia and digital media in distance education, including games, simulations and AI. Many of his master and doctorate students are developing new methodologies to engage learners in valuable experiences with digital media. Most of the research is conducted at Universidade Aberta and at CIAC (Center for the Arts and Communication Research, University of Algarve). External collaborations include an Honorary Fellowship at the Games, Learning, and Society research unit, University of Wisconsin – Madison (USA), and frequent collaborations with European universities and networks: TU Graz (AT), Open Universiteit (NL), Open University (UK), SmartLearning (DK), EDEN and EADTU. Recent contributions within EMPOWER (EADTU) include articles in the Envisioning Reports for Empowering Universities, online presentations in thematic Webinars and consultancy in Institutional Support: ICT, media and educational support services.

Currently, María is a Spanish Permanent Professor at the Law Faculty of the UNED –Universidad Nacional de Educación a Distancia/National University of Distance Education), in the Civil Law Department. She obtained the Doctor of Law degree from the Carlos III de Madrid University, Social and Legal Sciences Faculty, on 29 September 1992. She stayed as Visiting Professor at the Centre de Droit Prive Fondamental of the Robert Schuman University, in Strasbourg (France), for two academic years (2002-2004). Since October 2004 María worked as a Seconded National Expert at the European Commission (DG JLS – Civil Justice and Fundamental Rights Directorate, Unit C-1), in Brussels (Belgium); her secondment finished in October 2008. In December 2008 she returned to her previous position at the UNED.

As a University Professor she has devoted her entire professional career to research, teaching, writing, lecturing and those other activities inherent to that. Her C.V. attests that she is dedicated to go deeply into the study of Civil law at both national and European levels. It witnesses however that she has also concerned herself with other aspects related to the educational process, such as the methodology for a better transmission of knowledge. That is the reason why some of her research work focused on “alternative” teaching methods; besides, the University at which she is a Permanent Professor provides an appropriate environment to put such methods in practice and she is a membership of the Empower-Institutional Support: media and educational support field-European Association of Distance Teaching and Learning (EADTU) since 2014, where she has attended the Acción webinar on “Listening the educational initiatives for Migrants and Refugees coming from NGOs” (15 May 2017).

Since she took on her position as Permanent Professor of the Civil Law Department at the Faculty of Law of the UNED in 1996, she applied herself to materialize all the experience. Maria had already acquired in the lecture room and started to work in the area of distance-learning methods. Thus, she created “Legal Games”, a publication in which games are used as a mean to facilitate the study of law, in comparison with the rigid learning schemes traditionally applied in this field. She paid attention to T.V and radio programmes since she considered them to be key elements of the distance-learning methodology. María also produced and coordinated “CANVAS-Derechos reales e Inmobiliario Registral”/CANVAS-Real States and Registry law that is a subject of Law Degree. It is a pilot project developed at the UNED in 2018 to explore and coordinate the production of a EEB in a law subject, which combines all available Open Educational Resources (OERs) and additional functionalities, thus providing a comprehensive, versatile, customized, easy to update and all in one learning and teaching method. The pilot-project for learning and teaching online with both, CANVAS and Scenario mythologies of study and learning, was presented in Annual Conference OOFHEC2019 de EADTU that took place on 16-18 October 2019 in la UNED-Madrid (ES), with the titled: "Blended and online education within European university networks", Spain 16-18 October 2019, in the seminar 'Connecting educational resources to "all in one" distance learning and teaching: the CANVAS pilot project'. Currently, they are ongoing to work for improving it.

Mehmet contributed to the EMPOWER Envisioning report (4th Edition) with his article Bridging the Digital Divide Through ODL: Use of Sensitive Search for Student Support in ODL

He also contributed to the webinar week on Blended Learning in June 2019 with his presentation called: Why Diversity Matter in ODL? Case of Anadolu University

Miguel Rodríguez Artacho is an associate professor in the Department of Languages and Information Systems of the Universidad Nacional de Educación a Distancia (UNED) and a researcher in the group of educational technologies of the same department. He has been the founder of the standardization committee of educational technologies SC36 of AENOR (spanish NB of ISO) where he holds the position of technical secretary. He has also participated in several standardization forums such as ISO JTC1 SC36 and CEN TC353, as well as editor and  vice-chair of P1876 IEEE-Standards Association. At this moment, he coordinates in the UNED the eMadrid project financed by the Comunidad de Madrid for the development of educational technologies in this region.

Dimitris Kalles is an Associate Professor on Artificial Intelligence with the Hellenic Open University (HOU) and Director of the undergraduate study programme “Computer Science”.

He holds a Ph.D. (1995) in Computation from UMIST and is actively researching artificial intelligence and e-learning. He has taught several courses and supervised numerous dissertations and theses, both undergraduate and postgraduate, at the Hellenic Open University and at other universities. He has been involved in several projects on the implementation of infrastructures for e-learning.

He has worked as a researcher with Computer Technology Institute (Greece), as a Technical Director and member of BoD with Ahead Relationship Mediators SA (Greece), and as an evaluator for the European Commission, for the Corallia Clusters Initiative and for several other organisations. He was a member of the Organising Committee of ECAI-08 and ICTAI-12. He has served as Chairperson and Secretary General of the Hellenic Society for Artificial Intelligence.

He has published over 100 papers in journals and conferences and has contributed to the EMPOWER Envisioning report (1st Edition): Simulation for blended learning laboratory education.

Francisca is a Postdoctoral Research Associate in Technology Enhanced Learning for GO-GN and ADMINS at the Institute of Educational Technology (IET). His PhD was part of the Open World Learning (OWL) programme based in the Centre for Research in Education and Educational Technology (CREET) at The Open University, where he had a fully-funded Leverhulme Trust Doctoral Scholarship. His research project is titled “An Investigation into the accessibility of Massive Open Online Courses (MOOCs)". During Iniesto's PhD, he has investigated tools and approaches that may lead to more accessible MOOCs and raise awareness among the various stakeholders of accessibility challenges in this educational environment. He has designed and validated a four-component audit for improving the accessibility in MOOCs for disabled learners from an expert evaluation perspective.

Francisco's background is a Computer Engineer (bachelor’s degree at Autonomous University of Madrid, UAM) with extensive experience in IT consulting and software development using Agile techniques (for more than seven years), and he has participated in several international projects in Spain, Belgium and The Netherlands. He conducted his master's studies in the National Distance Education University (UNED) in the area of teaching, learning, collaboration and adaptation (EdTech). Since that moment he has been collaborating and participating in several research groups such as Technology and Accessibility UNED-Vodafone Foundation Research Chair, FutureLearn Academic Network (FLAN), the Computers and Learning Research Group (CALRG), OLA! Open Learning and Accessibility, YourMOOC4all and the GO–GN Global OER Graduate Network.

Listening the educational initiatives for Migrants and Refugees coming from NGOs

Losing migrants and refugees’ talents because of our inoperability will be our responsibility. Migrants and refugees are said to be “a tremendous added social, economic and political value”. Who are the most appropriate to detect and channel their specific needs on tertiary education? Universities should ask NGOs in order to identify training needs and design programs and evaluation systems relative to this vulnerable and valued collective. This workshop sets out the Spanish Refugee Aid Commission (CEAR), a representative voice of migrants and refugees in Spain, and HERMES, an old UNED project set up for special learning and teaching of migrants and refugees in which CEAR is interested in participating, channelling their voices. By María Teresa Bendito Cañizares (UNED)

Technology enhanced education has walked a long way since the first standardisation initiatives and industrial LMSs almost 20 years ago. In this scope we take a look back and forward in the current state of educational technologies with a view of current trends in the demand for distance education. By Miguel Rodríguez Artacho

Today we face complex changes in society and education (e.g. high turnover rate of knowledge, changing labour market, fast pace of technology renewal), which require a more creative response to the world problems that surround us. This calls for learning design solutions that deal with three major dimensions: context, technology and pedagogy, and aim at integrating learning in formal and informal contexts through blended learning scenarios. To get effective results emerging digital media tools must be used, but without losing track of a much needed pedagogical model. So, in this presentation we discuss relevant research on mobile learning and digital media while making the connection to blended learning. By  José Bidarra (UAb) 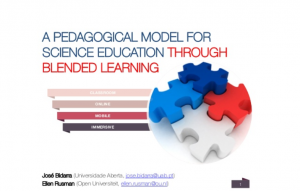 The 1st webinar hold the presentations from Jose B, M Teresa B, Miguel RA and Johann H. The three main topics from all the issues that were raised up during the meeting are: