Universities want to make their international programmes more scalable and more effective by new modes of teaching and learning. This can be done by organising blended courses, e.g. with a few weeks of face to face education, or even by offering courses completely online, e.g. with interactions in learning communities. Most effectively, international education is organized in partnerships with shared responsibilities in networked courses/curricula (leading to specific certificates) or integrated programmes (leading to a joint degree). Both physical and online mobility can be involved.

Meet Piet Henderikx from EADTU and listen to what he says about the expertise on international education.

Meet our experts on international education

Dario Assante is Associate Professor of Electrical Engineering at the International Telematic University Uninettuno. He is responsible of the Erasmus mobility programs and coordinates the double degree in ICT Engineering that Uninettuno organizes with Helwan University (Egypt). He is also the coordinator of the Masters courses in “Energy Management” and “Circular Economy 4.0”. He has taken part to several national and international project, being in particular the project manager of the Erasmus+ Strategic Partnership projects IN-CLOUD and IoT4SMEs, responsible for quality assurance of the Italo-Chinese satellite mission Limadou/CSES and academic referee of several Erasmus+ and LLP projects. His research interests are electromagnetic modelling problems, energy efficiency, particle accelerators and engineering education. He is author of more than 60 publications.

George Ubachs is Managing Director of EADTU, the European Association of Distance Teaching Universities. EADTU is Europe's institutional association of leading universities in online, open and flexible higher education, and is at the heart of the modernisation agenda of European universities. Growing from its eleven founding members in ten European nations, EADTU now has a membership of fifteen institutions and fourteen national associations across 25 nations. Its membership covers over 200 universities and around 3 million students.

George Ubachs is responsible for the development and support of the EADTU network, policies and execution of its goals in online, open and flexible higher education.

He is coordinator of international academic cooperation networks on networked curricula, virtual mobility and on business models for lifelong learning. He is further coordinator of the European MOOC Consortium (EMC), representing the Common Microcredential Framework (CMF) and the E-xcellence movement on quality assurance in online, open and flexible education. In this position, EADTU is leading the ICDE-UNESCO focal point for QA in online education for Europe. With the EMPOWERing universities network, EADTU represents some 80 experts that cover 12 specific fields of expertise related to online, open and flexible education. As coordinator of these networks he is working closely with the EUA, ENQA, ESU, ICDE and Unesco.

Before joining EADTU in 2002, George Ubachs has been working on various European programmes in the public and private sector in the field of regional social economic developments and was coordinator of the European Network of E2C-Europe (Cities for Second Chance Schools). George Ubachs graduated at State University of Leiden and Erasmus University Rotterdam on Public Administration with specialization in European Integration.

At the course level, online international classrooms/seminars can be to organised, engaging all students in a class with new learning opportunities for own students and students in the partner institutions.

Moreover,  aspects of funding, quality assurance, certification and accreditation are to be dealt with.

On 12 and 13 December 2018, the EADTU Peer Learning Activity (PLA) on Virtual Mobility took place in Maastricht. In this interactive event stakeholder representatives from universities, public authorities, agencies and networking organisations were brought together to reflect on the opportunities offered by virtual mobility.

The PLA focussed on identification of the roles of the different stakeholders and the collection of:

Setting the framework for Virtual Mobility

Introduction to the PLA and its objectives 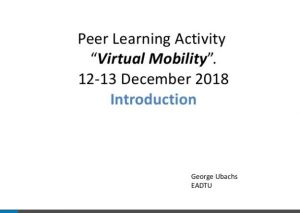 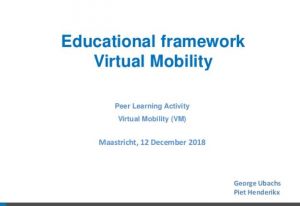 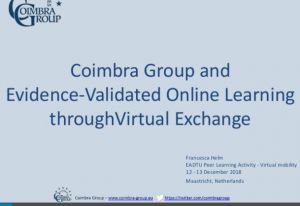 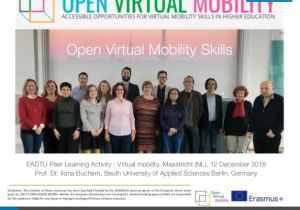 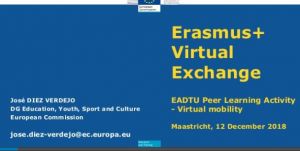 Examples of good practices and innovative pedagogies of international collaboration and virtual mobility: 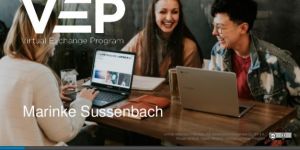 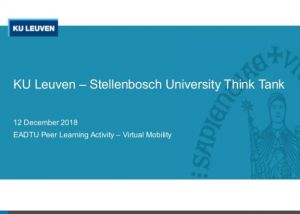 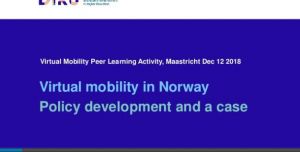 Example 4: VM in the framework in a humanitarian context 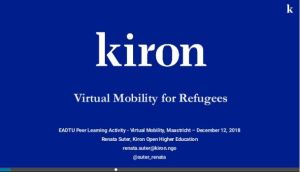 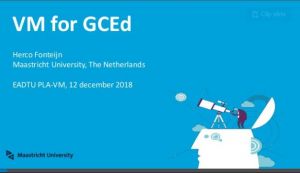 Closing remarks and next steps: 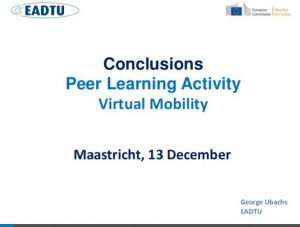 Current trends in distance education point to changing patterns in business models and in learning design, these were clearly interconnected, and the solutions reside in both high level and low-level decisions. The higher-level decisions are related to personalised learning, practical subjects, shorter programme cycles, partnerships for face-to-face sessions and technologies for seamless learning. The lower level decisions imply the design of learning environments and the implementation of learner support strategies. So, this talk will explore the processes and suitable technologies for learning design, including the design and application of digital media in teaching and learning, and a critical analysis of the benefits of technologies in education. By José Bidarra, Universidade Aberta

I'm pretty sure all distance educators like the concept of students learning collaboratively. But nothing's straightforward in ODL and it's worth asking some questions:

By Ormond Simpson, University of London

With blended learning having become “the new normal” (Dziuban, Graham, Moskal, Norberg, & Sicilia, 2018), even traditional on-campus universities work on creating new learning designs to meet their students’ needs for flexibility, mostly concerning work/life/study balance and opportunities for lifelong learning. Implementing such programs comes with a set of challenges in the realms of pedagogy, technology, and management, however. In this webinar, I will introduce the first blended learning bachelor program at the University of Graz in Austria. Focusing on some challenges faced and lessons learned, I will offer insight into the process of implementation that could be used for future projects in blended learning, particularly in other “brick-and-mortar” higher education institutions. By Simone Adams, University of Graz

Beyond success and dropout

This study first aimed to identify critical instances that characterise common student paths and deviations that lead to certification, interruption of studies or dropout in blended-learning. We then crossed the path types and degrees of completion with available student characteristics to infer various student profiles. Using time and credits required to graduate to identify path deviations may provide insights on early warning signs of potential dropout and lead to seeing dropout, not only as an academic failure but also as possible fulfilment of learning goals independent of certification, particularly. These results will allow us to understand various paths and goals students follow in higher-education blended-learning study programs that particularly attract non-traditional students, to propose guidelines for designing curricula that are more open and flexible in their delivery while maintaining support for learning progression to achieve program learning outcomes. (Kalliopi Benetos, Université de Genève)

The FernUniversität in Hagen, the Universidad Nacional de Educación a Distancia (UNED) and the Open Universiteit Nederland (OUNl) are three leading European distance learning universities firmly devoted to further the principle of equal opportunity by safeguarding equal access to top quality higher education to everyone, using a methodology based on the principles of modern distance learning focused on the needs of the student. In 2014, after eight years of successful cooperation in the organization of international common teaching activities on the bachelor level, these universities established a Strategic Partnership to further cultural exchange and best practices in the internationalisation of high quality education in law for all three Bologna cycles. Developed within this framework, the EDELNet (European Distance Education in Law Network) project is planned to be the first building block in the implementation of an ambitious scientific and pedagogic concept of Blended Active Learning and student oriented teaching facilitating a personal learning path with an emphasis on interdisciplinarity and intercultural communication skills as a basis for a better understanding of each other’s legal cultures and practices throughout Europe and beyond. The project has been recently awarded with European Union funding for the period 2015-2018 by the DAAD ERASMUS+ funding program for Strategic Partnerships (Call 2015). By Juan Garcia Blesa, Nils Szuka (FernUni)